skip to main | skip to sidebar

Thomas Cup....yes....the elusive cup that has avoided Malaysian soil for what....18 years? it was back in 1992 I still remembered that I got a free public holiday because Malaysia won it's first ever Thomas Cup. Years has proven that it might be our last.
You would say I am being pessimistic, not being patriotic, looking down upon fellow Malaysians. OK. Let me prove to you a fact. Malaysian football (soccer) team are called the Malaysia Tigers and coincidentally, we are indeed the Tiger of Asia in the football arena more than 30 years back. We are one of the best if not the best and we hell did beat a lot of teams back then. In the very same era, Japanese were still short, with underdeveloped hands and legs (so to say) and don't even know what the hell's football. Fast forward 30 years, and we have Japan kicking our balls all the way back to Neolithic age should we be having a game with them.
What about badminton? Didn't we did great? Oh Yes we DID! Our dear Datuk Lee is the world No.1 male singles badminton player. Having him on the Malaysian team does bring hope that we would be able to hoist the elusive Thomas Cup once again. With homegrown advantage (that is a freaking whole load of psychology advantage), it is very slim that our 'tigers' would be tame. Reality does have a really big way of telling you straight in the face. Our No.1 player, lasted only 48 minutes in the court, with a very dismal 2nd set. Lin Dan came in the court all high and mighty but our dear Datuk was frowning. Playing in your own court and can't you at least beam or radiate with a little bit of confidence? Sigh.... of course, since No.1 went down, no point rambling on with the 2nd and 3rd matches. China went ahead with straight sets.
Although we should be consoling our players on the losses they suffered, the BAM Patron YABhg. Datin Paduka Seri Rosmah Mansor said: "Mungkin GABRA pemain kita" Hm....GABRA? how can you GABRA in your own court? Your homegrown? Kalau boleh gabra kat gelanggang sendiri, apatah lagi kat gelanggan lawan? Belum masuk dah sakit jantung kot!
As what my cousin said, tomorrow headlines should read: "Malaysia Tersungkur Semasa Cuba Memanjat Tembok Besar China."
Posted by Kevin Chiang at 12:34 PM No comments:

OK. In the news quoted from The Star as shown above, Malaysia is aiming to achieve 1st World safety practices among road users in about 10 - 15years. Oh Yes! I do agree very much with this statement.

More often than not we have traffic offences of all kinds on Malaysian roads. It is not unusual to see not fewer than 5 traffic offenders in just 1 minute on the road especially in big cities like Penang, Kuala Lumpur and Johor Bahru. Now one would say that I am exaggerating and the numbers are not that bad. Well. I could bet that by walking along any congested commercial areas for 1 minute, you will get at least 5 cars parked illegally. Confirmed.

Now then again, what has all the offences got to do with the news above? Everything. Some say, with heightened enforcements, stricter law and harsher penalties for traffic offenders, the number of law flouting by any road users will lessen, hence making the roads safer. True, only to a certain extend. You see, harsher penalties and stricter law will only curb offences by habit, not offences by need.

One would say it is my crooked mind who would even think of flouting the law (traffic law) is a need. I'll prove to you why.

1. You are driving 110km/h on the highway (speed limit is 110km/h) on the overtaking lane. A lorry is also travelling at 110km/h alongside you, on the left lane. Suddenly a vehicle speeds from the rear with speed in excess of yours and is tailgating you. Would you:

Of course, this will not happen if EVERYONE were to be obeying the law and swear by the speed limit.

2. You are driving on a single lane road, approaching a traffic light. The traffic lights are blinking green and will turn yellow anytime. Suddenly, you see a speeding vehicle from behind with all lights flashing and is closing in on you fast. Would you:

3. You are at a traffic light of a crossroad with yellow box. Suddenly, traffic police officers on their big ass Honda comes from behind with sirens blazing, obviously trying to 'open the road' for some good-for-nothing-as-if-normal-people-are-not-rushing-time-and-have-no-urgent-appointments-to-keep-up-with Vampiric Imbecile Person(s). Would you:

a. Jump the light, move into yellow box / the junction to allow the 'opening up of the road'.
b. Do nothing. Just sit in car and wait for light to turn green.
c. Off your engine, pop your bonnet, open the radiator cover and act 'car overheat'.
If i choose a., I'm flouting with at least 1 traffic law. If I choose b. I might be given a summons for obstruction of traffic. So I guess I'll choose c..

So tell me now, is flouting the the law (traffic law) a habit or a need?
Posted by Kevin Chiang at 8:39 AM 2 comments:

Accidents: How and Why?

The accident streak finally ends.... Well, don't get me wrong here. I'm not involved in any of the accidents but hell i did saw quite a few for the past 11 days.

I had witnessed (both happening and happened) accidents at an average of 1.36 per day.... Damn.... Was there any omen for me? Of course being the me with a lop-sided brain as some would say, I did joke around with some of my friends like these were like messages to me of an impending doom or something....

Why do accidents happen? Million dollar question with no answer. I could say that placing a homo sapien in the controls of any mechanised instruments are somehow accidents in the waiting.... Especially automobiles.

Although judging by my driving attitude I could not say that I am an angel on the road, I am still better than most of the road users out there. Why?


1. I do not put on HAZARD LIGHT (double indicators) even when the rain is pouring like Niagara Falls, I use ONLY the overtaking indicator.

2. I do not speed (seldom happens) if I am not confident of the road conditions, car condition and my own condition.

3. I do not switch on my HIGH BEAM when they are cars in front of me or if there are ONCOMING traffic, even if it is only a BICYCLE.

4. I do not cut corners / 'creep' into other people lanes during cornering if there are cars moving alongside mine (even if the car is a car length behind or in front)

5. I do not drive at the speed limit on the overtaking lane when there are no god damn cars on the slow lane.

6. Referring to point 5, I do not drive at the same speed as the vehicle on the slow lane. Either I choose to drive slower and chug along behind the cars on the slow lane and let the faster ones overtake me (seldom) or I speed as fast as my engine could go and leave almost everyone else behind (always happens).

7. My brakes are better than most cars in my class. And I do not skimp on car maintenance.

Well, technically, my friends do call me a devil behind wheels. Then again, it's not that I'm the devil on the road. It is the other road users, either they are too slow, too egoistic, too stupid or just plain incapable of driving, even in a kancil.

Flame me all you can but I do feel that I am a better driver than most out there. :)

It was in the wee early hours of 6th of March 2010, Saturday, when Mujib came over to fetch me of to Cameron Highlands. We were supposed to depart for AutoCity @ Juru at around 5:30 a.m.? Somehow we got delayed :P
We had Mujib, Shane, Adrian and I and we are to fetch Sean a.k.a. Garlic before heading over to Juru.

Had a short breakfast and of we go to the highlands. Mujib drove half of the journey and I took the other half.

Nevertheless, we made good time and reach the summit at around 10:00 a.m.


There is a lot to look forward to in this trip. Imagine meeting up with seasoned and professional photographers, sharing the skill that they have (or rather learning whatsoever skill that I need as I am still new to the art), taking in the picturesque scenery that Cameron Highlands can offer, the chance to do macro on the plants, insects, and the grand daddy of the trip, to touch the Canon 400mm f/2.8 L IS USM lens attached to a 7D!!!! You'll see the size of the lens later :P
OK, crap aside....we will be having 3/4 photo shooting session but 1 will not to be materialise due to bad weather. Nevertheless, let me showcase (cheh....like glamour-lah) some of the shots that I took up in Cameron Highlands.

(Various Views in, at and around the Boh Tea Centre and Plantation, Sg. Palas, Cameron Highlands.)

Day 1:
Did not get much shot in the 1st day, we were supposed to head into Mossy Forest to have some Landscaping/Macro session but weather was in the way. Instead we head back to our apartments to rest. Naturally, being photographers, we can't sit still. Hence, my apartment (Chris and Wifey, Mujib, Shane, Adrian and I) decided to try our luck by going up the Sg. Palas Boh Tea Centre instead. Heck, might get some nice shots right? Day 2:
Woke up damn early. We were supposed to do star trail but, drowsiness took it's toll :P Either way, we did wake up early enough to catch the sunrise up Mt. Brinchang, supposed to be the highest point in Cameron Highlands. Well actually, the spot we picked wasn't that perfect, and we vowed to go some other day to get better shots of Cameron's sunrise :P Views of the Sg. Palas plantation on the way down from Mt. Brinchang. Shot of a hill of tea trees, rolling off into the horizon. Did this shot with a little sci-fi in mind.... Thank you George Lucas :P A shot of a harvesting bee I got while goofing around the Sg. Palas Tea Plantation. This abstract was done during our visit to the Cactus Valley on the 1st day. I like this shot a lot as it resembles the out reaching hand of some alien organism. Somehow it carries a certain meaning, of nature trying to reach out to humans, to relay the message nature has for humans.... It is the passion, the will to produce good photographs is what brought us together.

Oh Yeah, I did mention about a big-ass lens from Canon right? Here is a picture of me parading it! 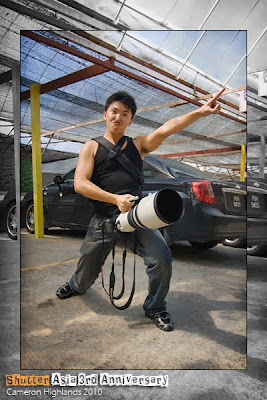 Posted by Kevin Chiang at 11:10 AM No comments:

Well, I think I've been rambling for ages on creating a blog and well....guess I'm starting for good now since it's CHINESE NEW YEAR!!!! Better take on the new year head ON!

I'll be talking bout loads of stuffs here and SINCE it's a festive season, let's start off with a happy note shall we? :P

Would like to wish everyone HAPPY CHINESE NEW YEAR 2010!!!! Above was a view taken of Penang's famous Kek Lok Si. The Light display will be on until Chap Goh Meh!!!! Don't Miss It!!!!
Posted by Kevin Chiang at 2:41 AM No comments:

Kevin Chiang
Kuantan, Pahang, Malaysia
Will do anything to bend anyone to my will. Sarcastic, Bad, loves to give chaos. A real D3V!L. Will never miss a good photography opportunity! Flickr: http://www.flickr.com/photos/5ub23r0/